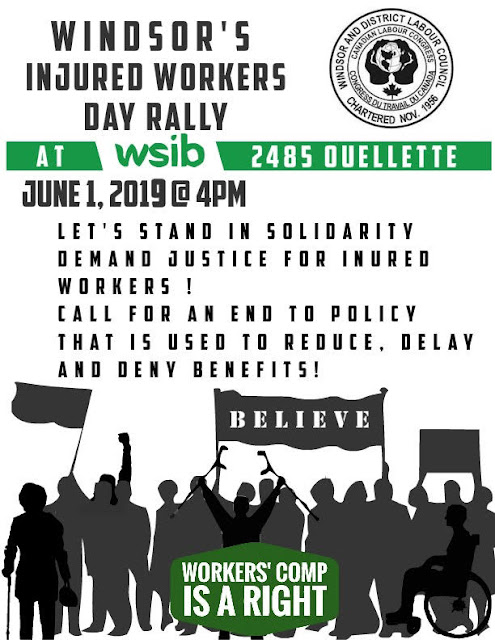 Posted by Windsor Injured Workers at 16:12 No comments:

Email ThisBlogThis!Share to TwitterShare to FacebookShare to Pinterest
Labels: advertisement


Posted by Windsor Injured Workers at 17:37 No comments:

Email ThisBlogThis!Share to TwitterShare to FacebookShare to Pinterest
Labels: video

Click on this link, to read the entire artile:
https://blackburnnews.com/windsor/windsor-news/2019/05/14/workers-comp-cuts-protested-windsor-rally/


By Mark BrownMay 14, 2019 3:52pm@markbrownradio
Concern over planned changes to Ontario’s workers’ compensation system was the focus of a rally in downtown Windsor.

A small but vocal group of people gathered Tuesday afternoon in Charles Clark Square for a rally on the Day of Action, a province-wide movement to urge the provincial government to reconsider planned restructuring of the WSIB (Workplace Safety and Insurance Board).

The Ministry of Labour has proposed roughly $16 million in cuts to its prevention office budget, according to the Toronto Star, in a move it says will eliminate unnecessary expenses and enable it to concentrate on the more pressing and urgent claims. But those who depend on WSIB have said the cuts will only hurt injured workers, particularly since the WSIB is not funded by taxpayer money.
Liz Garant, an injured worker who helped plan the Windsor rally, said she and others in her predicament are not getting the whole story, and what they do know will not protect workers.
“They say there’s money in the budget, but a lot of people are not reporting their injuries because they’re scared,” said Garant. “They’re going to be doing online training for health and safety, instead of getting the people to go out and get training.”
WSIB cut its unfunded liability last year, which according to the Star, is the difference between projected future costs of workers’ comp benefits and the existing claims in the accident fund. This means a reduction of 30 per cent in employers’ premiums effective this year.
Garant said the proposed restructuring is another reason to be concerned.
“It’s scaring us all, like the autism, the education, all the cuts going on with Legal Aid,” said Garant. “It seems like they’re going back on the vulnerable. It’s like we’re all going to end up on ODSP [Ontario Disability Support Program] or OW [Ontario Works] or out on the streets. That’s what we all feel like.”
Similar rallies were held across Ontario Tuesday.

Posted by Windsor Injured Workers at 16:57 No comments:

Email ThisBlogThis!Share to TwitterShare to FacebookShare to Pinterest
Labels: articles

Click on this link, to read the entire article:
https://www.thestar.com/news/canada/2019/05/22/injured-workers-face-benefit-cuts-as-compensation-board-assigns-them-phantom-jobs-with-ghost-wages-report.html

By Sara MojtehedzadehWork and Wealth Reporter
Wed., May 22, 2019

Permanently injured workers are having their benefits slashed because the provincial compensation board deems them capable of doing “imaginary” jobs with “ghost wages,” a new report says — even though the board’s own audits have identified significant barriers to finding real employment.
*****
(Please realize that to see all of what is stated, you need to click on the link and read it.)

Posted by Windsor Injured Workers at 17:12 No comments:

Email ThisBlogThis!Share to TwitterShare to FacebookShare to Pinterest
Labels: articles

Click on this link, to read the entire article:
https://www.ourwindsor.ca/news-story/9350486-windsor-injured-workers-participating-in-provincial-day-of-action/?fbclid=iwar2nle7pkh8pqc4witlhztuw7ienhhk5om3ia4nqpfs4xfraxs7emrhoiz8 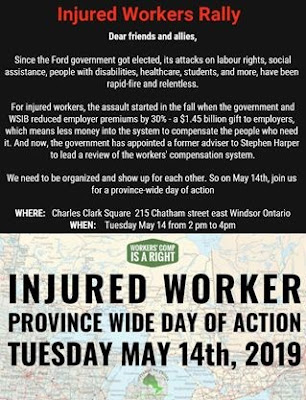 The Windsor Injured Workers is holding an action tomorrow, Tuesday May 14 to denounce the unjust treatment of injured workers that is being carried out by the Workplace Safety and Insurance Board (WSIB) and the provincial government. The event will take place at Charles Clark Square 215 Chatham Street, and is part of an Ontario-wide Day of Action organized by the Ontario Network of Injured Workers’ Groups (ONIWG).
“Since 2010, the WSIB’s bank account has doubled, while compensation to injured workers has been cut in half,” said Windsor Injured Worker member. “When people are injured or made ill on the job, we have a right to be treated with dignity and respect. But the WSIB and the government seem to be working hand-in-hand to try and take that away from us.”
Presently, the government is conducting a closed-door review of the WSIB, with early reports suggesting that privatizing the workers’ compensation system is on the table. An American-style private insurance scheme would make things go from bad to worse for injured workers, only leading to further pain.
This comes on the heels of the fall announcement that the premiums employers pay into the system are being reduced by 30% - nearly a $1.5 billion gift to employers at the expense of workers. This is exactly what Mike Harris did when he was Premier, and it meant a restriction on compensation benefits because there was too little money coming into the system.
“Since the Ford government got elected, its attacks on social assistance, people with disabilities, healthcare, students, labour rights, and more, have been rapid-fire and relentless,” said ONIWG President, Willy Noiles. “The ‘little guys’ that Doug Ford is supposed to stand up for are instead being trampled on, and injured workers are part of this group. But today’s Day of Action is about saying enough is enough, we won’t stand for it.”
– This story has been updated from an earlier version to correctly identify to the day of the rally as Tuesday, May 14.
– Submitted by Windsor Injured Workers